The EUR/USD pair began to correct on the hourly timeframe on June 22, not quite reaching the first upward trend line. However, while the quotes of the pair continue to remain inside the downward channel, therefore, the trend in the current timeframe remains downward. A price rebound from the upper line of the channel may trigger a resumption of the downward movement, despite overcoming the critical Kijun-sen line. Thus, sellers remain in the market, and on the way up, buyers still have many potentially strong obstacles that can temper their ardor. This is, at the lowest, the Senkou Span B line and the resistance area of 1.1326-1.1343. If all these resistances are overcome, then the bulls will be able to activate and begin forming a new upward trend. 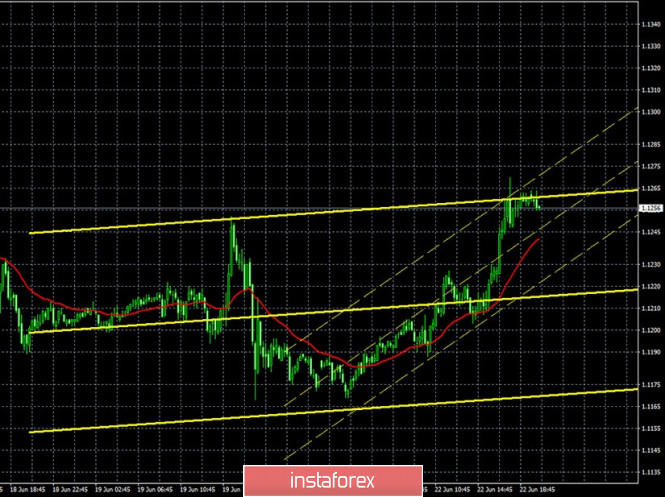 Both linear regression channels turned up on the 15-minute timeframe, so the trend has now changed to an upward one in the short term. So far, this movement is only a correction on the hourly chart. 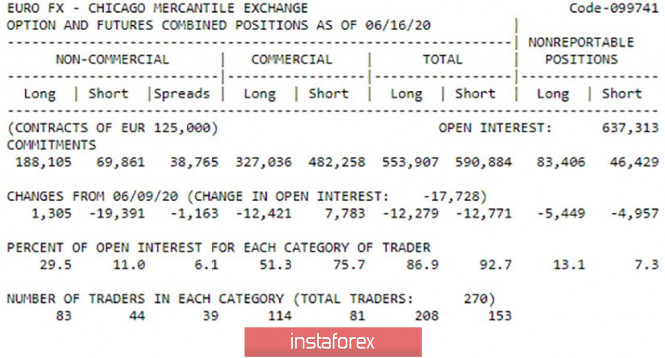 The euro/dollar pair steadily rose until June 16 (the deadline, data for which is included in the latest COT report) and only began a correction in the last two days. According to the COT report, professional traders were busy during the entire reporting week not with opening purchase contracts, which could be assumed based on the direction the pair was moving, but with closing sale contracts. In just five days, professional traders closed almost 20,000 sell contracts and at the same time opened 1,300 long euro contracts. Thus, the continued strengthening of the European currency was absolutely logical at that time. But, we emphasize that large market players were not buying the euro for the second week in a row, and therefore do not believe in the prospects of this currency. The euro grew for two weeks almost at the mere closure of contracts for sale by large speculators, which caused a skew of supply and demand for the euro. Accordingly, we believe that this week the dollar will continue to rise in price, and the new COT report will show a decrease in the net position in the euro.

The general fundamental background for the EUR/USD pair did not change at all on Monday, since no important macroeconomic reports were published, and there were no important fundamental events. Market participants continue to be entertained by Donald Trump, however, apart from this, nothing interesting in the world happened on the first trading day of the week. By and large, traders are now ready to focus on important macroeconomic reports that are not yet available, and on serious fundamental topics that are now paused. There is one important topic in the European Union. The formation of a Recovery Fund worth 750 billion euros, which should be aimed at helping the European economy recover from the coronavirus crisis. There are many more topics in the United States, but all of them are also paused now, while the most important ones are threatening to be put on hold. It is primarily a confrontation between the United States and China. After several months of mutual skirmishes, insults, and accusations, it turned out that Washington was not ready to apply new sanctions and duties against Beijing. And it’s better to say that Donald Trump is not ready to apply any sanctions against China, because any retaliatory measures can further damage him personally. It is regarding his political ratings four months before the presidential election. Today’s business activity reports in the US and the EU are unlikely to have a significant impact on the movement of the euro/dollar pair.

Based on the foregoing, we have two trading ideas for June 23:

1) Bulls continue to remain in the shade, so the EUR/USD pair could resume the downward movement. However, in the current conditions, it is imperative for the bears to stay inside the descending channel, which will maintain the current downward trend and will make it possible to trade with a view to the downward trend line, which has not yet been reached. Further downward movement will depend on overcoming or not overcoming the trend line. The potential Take Profit is 85 points.

2) We recommend considering the option to resume the growth of the EUR/USD pair only when bulls manage to gain a foothold above the downward channel. In this case, we recommend opening euro purchases with the first goal of the Senkou Span B line (1.1308). Further trading on the increase will be possible after overcoming the resistance area of 1.1326-1.1341 with the target level of 1.1417. Potential Take Profit in this case is from 30 to 150 points.