Home Latest Forex News Analytics and trading signals for beginners. How to trade EUR/USD on June...

30M chart of the EUR/USD pair 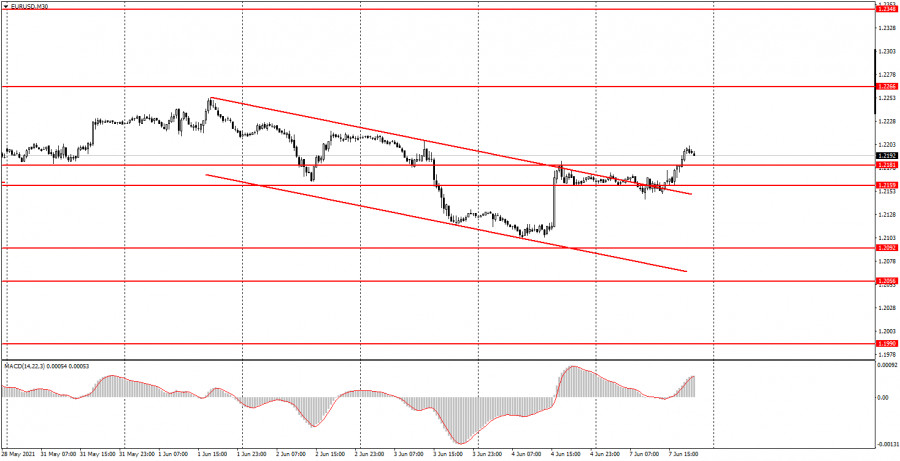 The EUR/USD pair was trading in a very strange manner on Monday. Even on a 30-minute timeframe, it is clear that at first the price practically stood in one place and moved exclusively along the level of 1.2159, and in the second half of the day it started up sharply. Since neither America nor the European Union published a single macroeconomic report or any other fundamental event today, it was very strange to observe a sharp rise in the American session. Of course, theoretically, American traders could have reacted to information from US Treasury Secretary Janet Yellen, who today announced that the US government will continue to adhere to the general stimulus plan, which means huge budget spending. This is bad news for the American currency, since the US budget has long been in deficit, which means that additional money will be printed or borrowed. Nevertheless, it is impossible to say with certainty that it was precisely because of this information that there was a leap upward. Also, the pair left the downtrend channel in a very strange way. For 10-12 hours, it traded right along the upper channel line and only then began an upward movement. Thus, the downtrend has been canceled and the pair continues to trade within the limited sideways range.

5M chart of the EUR/USD pair 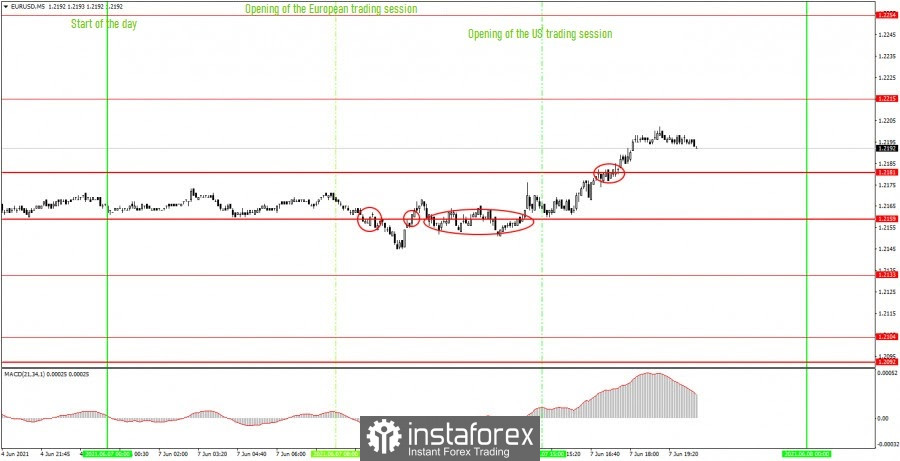 The technical picture on the 5-minute timeframe is very ugly. The price formed a sell signal during the European trading session, which turned out to be false, then a buy signal, which also turned out to be false, and then it traded along the level of 1.2159 for several hours, that is, it was in an intraday flat. The first signal was generated when the flat had not yet begun, so novice traders could work it out with a short position. It turned out to be 11 points unprofitable. But all subsequent signals should have been filtered, since it has already become clear that a flat has begun. A flat was expected due to the fact that it’s a Monday, and also because of the empty calendar of macroeconomic events. The pair resumed its upward movement only in the US trading session and then it formed another buy signal – a breakthrough of 1.2181. Newcomers could work out this signal, but at the moment it should have been manually closed, since the price cannot reach the target level (1.2215) today, and the day is coming to an end. It was possible to get a profit of 7-8 points on this deal, which practically covered the losses on the first deal.

The downward trend is canceled on the 30-minute timeframe, so the pair is out of any trend at this time. Formally, we can say that an upward trend has now begun, but look at the chart of the pair’s movement over the past three weeks and you will see that all this time the quotes were between the levels of 1.2110 and 1.2260. Not the narrowest side channel, but this is the reality. Therefore, from the current position, the pair can move in any direction with the same probability. Therefore, we do not recommend tracking any signals from the MACD indicator on the 30-minute timeframe. It is recommended to trade from the levels 1.2159, 1.2181 and 1.2215 on the 5-minute timeframe. Take Profit, as before, is set at a distance of 30-40 points. Stop Loss – to breakeven when the price passes in the right direction by 15-20 points. At the 5M TF, the target can be the nearest level if it is not too close or too far away. If located – then you should act according to the situation. The EU is slated to publish its Q1 GDP on Tuesday, so you should trade very carefully at the time of this report. There are no major events or reports scheduled for tomorrow in America.

Support and Resistance Levels are the Levels that serve as targets when buying or selling the pair. You can place Take Profit near these levels. Red lines are the channels or trend lines that display the current trend and show in which direction it is better to trade now.

Up/down arrows show where you should sell or buy after reaching or breaking through particular levels.

The MACD indicator (14,22,3) consists of a histogram and a signal line. When they cross, this is a signal to enter the market. It is recommended to use this indicator in combination with trend lines (channels and trend lines).

Important announcements and economic reports that you can always find in the news calendar can seriously influence the trajectory of a currency pair. Therefore, at the time of their release, we recommended trading as carefully as possible or exit the market in order to avoid a sharp price reversal.

Beginners on Forex should remember that not every single trade has to be profitable. The development of a clear strategy and money management are the key to success in trading over a long period of time.