Home Latest Forex News Trading plan for the GBP/USD pair for the week of June 7-11.... 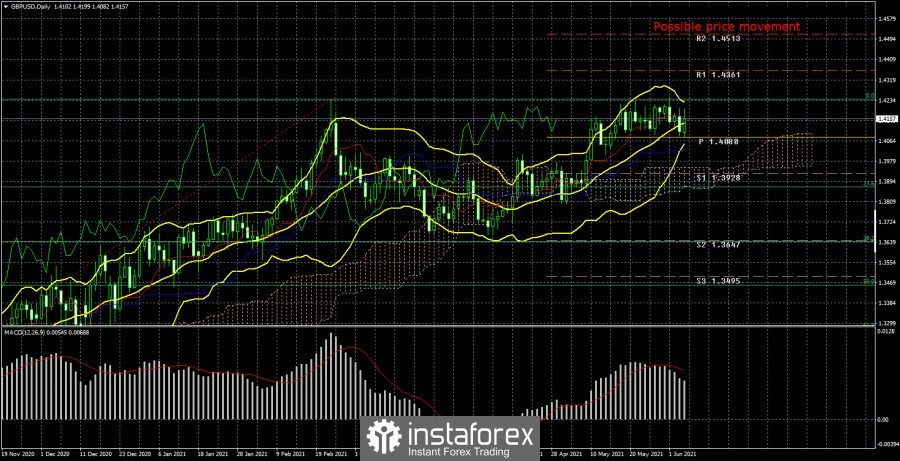 The GBP/USD currency pair as a whole declined over the past week by 20 points. Thus, the pair remains inside the side channel. Now its borders have slightly expanded to 1.4080-1.4230. However, this does not change the essence of the matter. The British pound, having reached its 3-year highs, has been treading water for the third week in a row. If the European currency showed a movement this week, which at least can be called a “pullback,” then the pound sterling again strenuously pretends that it is being corrected. It just stands still, and traders can resume buying it at any time. We remind you that the global fundamental background of the pound sterling is even better than that of the euro currency. Because the pound also has a “speculative” factor that does not allow it to decline much. At the moment, after three weeks of standing in one place, the pair’s quotes could not even fall to the critical line. Thus, if for the euro/dollar there is no reason to expect the end of the fall of the US currency, then for the pound/dollar, these reasons are even less. We believe that the upward movement will continue in almost any case. Despite the usual fundamental background, which in the UK remains not the best. Despite the macroeconomic statistics, which are frankly worse in the UK. Despite the geopolitical problems that the UK has already faced and will still face, and which the United States does not have. Despite the negative consequences of Brexit, which will affect the economy for several more years. It will be possible to expect a certain drop in the pair’s quotes no earlier than the price-fixing below the critical line, which is an almost impossible task with the current strength and desire of the bears. 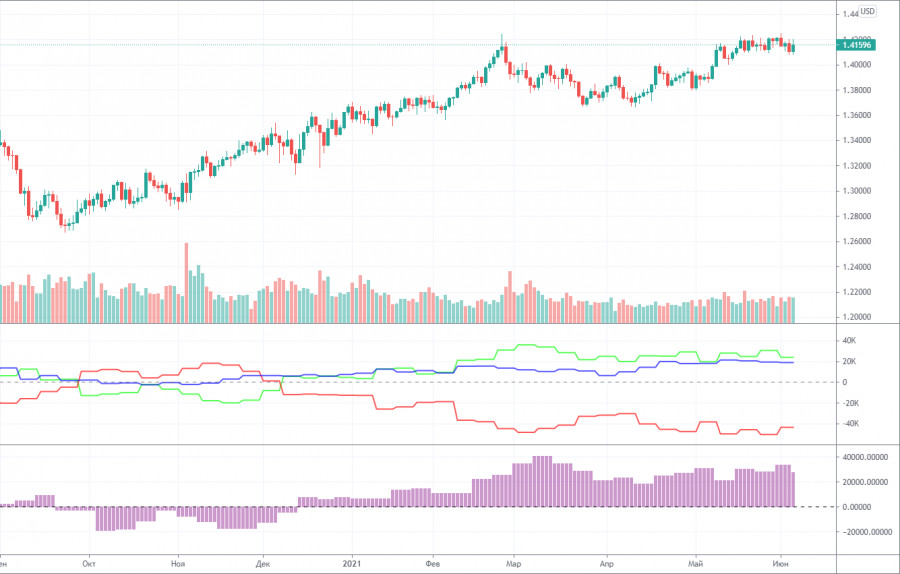 During the last reporting week (May 25-31), the GBP/USD pair increased by 55 points. However, in general, no one doubts the direction of the current trend – upward. It was all the more surprising to watch the latest COT report, which showed that professional traders opened 0.5 thousand contracts for buying and 6.5 contracts for selling over the same period. The net position of the “Non-commercial” group decreased by 6 thousand, which is a decent value for the pound. Thus, the picture is as follows. The pound continues to grow and can not even really adjust. At the same time, the size of the net position of large players practically does not change. Since the beginning of March, changes in the net position are insignificant, as shown by both the first and second indicators. And in any case, these changes do not reflect what is happening in the market.

Moreover, the pound continues to show growth, simply not commensurate with the “bullish” mood of non-profit traders. And in general, any group of traders and all together. Thus, we continue to talk about such a global factor as the infusion of trillions of dollars into the American economy, which is the main reason for strengthening the British currency. By the way, look at the previous section of the trend between October 2020 and March 2021. The pound rose by 1,400 points, while the net positions of commercial and non-commercial groups of traders remained virtually unchanged. That is, the major players did not increase purchases at this time. At the same time, the pound showed an increase of 1,400 points, almost without a single pullback. As they say, the presence of third-party factors on the face.

During the current week, there were very few macroeconomic publications in the UK. There were several reports on business activity, which caused a very modest reaction. Also, almost every day, the Chairman of the Bank of England, Andrew Bailey, spoke. However, he did not tell the markets anything worthwhile. Everyone was waiting for him to confirm the words of Gertjan Vliege about a possible increase in the key rate at the beginning of next year. And in general, information about a possible tightening of monetary policy. But Bailey was talking about the climate, about cryptocurrencies, anything but the economy and monetary policy. Thus, the pound/dollar pair was mainly affected during the week by the same statistics from overseas as the euro/dollar pair. The pound sterling also fell on Thursday on the ADP report, and on Friday – went up on the Nonfarm Payrolls report. There is simply nothing more to note in fundamental and macroeconomic terms. In any case, the pound does not need the support of macroeconomic statistics from overseas or the foundation from the UK right now. Even if the Bank of England raises the key rate by a couple of percent tomorrow, what will it change for the pound if it is already growing recklessly?

1) The pound/dollar pair continues to be in an upward trend, which resumed almost three months ago. Thus, buy orders on the 24-hour timeframe remain relevant, despite the current flat, and the nearest targets are the previous local high of 1.4240 and the resistance level of 1.4361. Given that global factors are now supporting the pound, it is unlikely that the pair will fall in the near future. In any case, until the price is fixed below the critical line, there is no point in talking about a downward movement.

Support and resistance areas – areas from which the price has repeatedly bounced before.

Indicator 1 on the COT charts – the net position size of each category of traders.

Indicator 2 on the COT charts – the net position size for the “Non-commercial” group.