Home Latest Forex News Analysis of GBP/USD on June 3. Euro and pound collapsed due to... 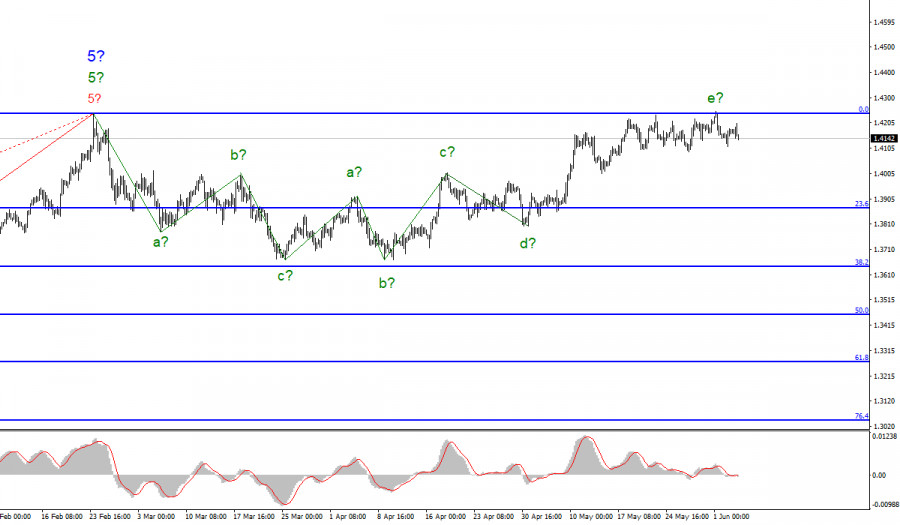 The wave pattern of the GBP/USD pair has not changed in recent weeks. Today’s decline in quotes by 90 basis points also did not even affect the current wave pattern in any way. The pound has been in a side channel for more than two weeks, strictly below the 0.0% Fibonacci level, where it remains. Thus, after the proposed wave e completed its formation, the correction wave structures began, which are very difficult to determine for any particular wave of the higher scale. An unsuccessful attempt to break through the 0.0% Fibonacci level indirectly indicates the end of not only the last upward wave but also the entire upward trend. On the other hand, the wave pattern of the upward trend can still take on a more complex form. A successful attempt to break through the 0.0% Fibonacci level will complicate the upward set of waves. Thus, it is still recommended not from the wave pattern, but from the level of 1.4240.

This instrument started a new and even strong decline on Thursday, but it is still cannot be concluded that the complex corrective sets of waves, whose construction was observed in recent weeks, have ended. At the moment, the quotes of the pair declined by 90 points, and perhaps it will continue to do so with a greater value when the day ends. However, it may also accelerate when the Nonfarm payrolls report this Friday turns out to be weak. For now, it is best to wait first for the completion of today’s decline, and see where the instrument will be headed. After that, we can look at the publication of Nonfarm Payrolls, and then draw conclusions.

It can be assumed that the decline in quotes during the afternoon was caused by a strong ADP report, which showed that that the number of employed (workers) in the private sector rose in May by 978 thousand, against markets’ expectations of 654 thousand. These strong labor market data have inspired optimism and now, the markets are waiting for strong data on the Nonfarm Payrolls report. On Thursday morning, there were indices of business activity in the service sector and composite in the UK. Both showed an increase in comparison with April and the markets unexpectedly won back this information as well, since the pound was in demand at that time.

As for the US, their composite and service PMI also exceeded all market expectations. The final data was the ISM business activity index for the services sector, which also increased compared to April and exceeded the forecasted levels, amounting to 64.0 points. Therefore, the strengthening of the US dollar in the second half of the day is absolutely natural.

In the meantime, the wave pattern continues to be twofold. The pound is moving horizontally, making it hard to be traded. At the same time, it is not even clear whether the proposed wave e is already done with its formation, as its internal wave structure looks ambiguous. It is recommended to sell the instrument with a protective order above the level of 1.4240, which corresponds to 0.0% Fibonacci. But once the level of 1.4240 is broken, it will be possible to buy. This strategy remains unchanged at the moment. 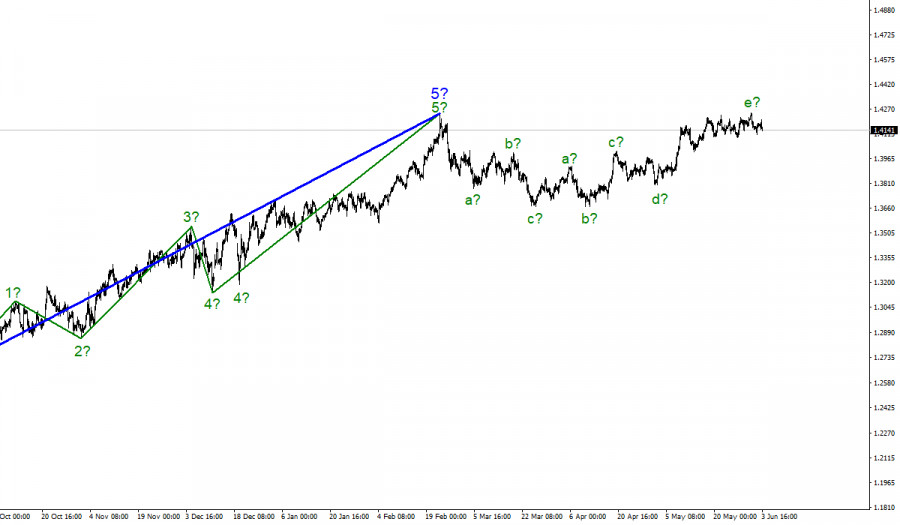 The upward part of the trend, which started to form a few months ago, is taking on a quite vague form. It was mentioned above that several wave pattern options are possible at once. Unfortunately, different options offer different further developments. Therefore, it may be necessary to wait for some time for the current wave pattern to slightly clear up.