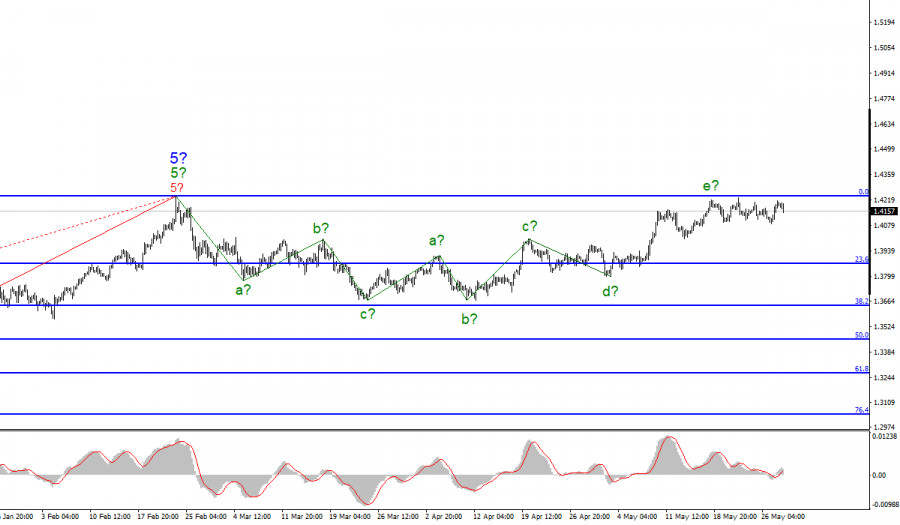 The wave counting for the Pound/Dollar instrument does not change, although a rather unexpected decline began today, which amounted to at least 60 basis points. But it doesn’t really matter, as the pound sterling has been in the 120 basis point sideways channel for more than a week. Thus, a 60-80 pips decline is still within the range. And all this range and movements within it together confuse the wave pattern after the supposed wave e completed its construction. Thus, at the lowest level, the instrument is now building corrective micro sets of waves and does not clarify the current wave counting in any way. In the current situation, it is necessary to wait for the clarification of the wave pattern, since, in fact, the instrument is now in place. The sections of the trend, which were built after February 24, also do not shine with the intelligibility of the wave counting. Thus, the sterling has been moving very difficult lately.

The Pound/Dollar instrument was also declining today, as well as the Euro/Dollar. No important economic information has been received from the UK this week. However, yesterday, a member of the Bank of England’s monetary committee, Gertjan Vlieghe, said that next year the regulator may raise the key rate if the economy continues to recover. If it recovers at a high rate, then the rate may be raised even a little earlier. As you can see, this information did not provide any help for the wave counting. Yesterday, the instrument quotes rose within the same sideways range, without even trying to leave it. And today, the decline has already begun. Thus, the influence of Vlieghe’s words was of a very short-term nature. And the markets are not particularly interested in the state of the British and American economies at present. The markets did not manage to get the instrument through the 1.4240 mark, although the last week was spent close to it. Well, today, on Friday, there was no news at all in the UK, and in the US, not the most important reports were released, which did not have any impact on the movement of the instrument. And until the moment when the quotes fall below about 1.4090, it is also not necessary to talk about a strong strengthening of the dollar. Perhaps next week there will be more news and events, then the markets will cope with the task of more active trading of the instrument. This also applies to the Euro/Dollar instrument.

At this time, the wave pattern continues to be twofold, so I recommend waiting for its clarification. Everyone sees that the sterling is moving horizontally, which makes it difficult to work with it. At this time, it is not even clear whether the proposed wave e has completed its construction. Its internal wave structure looks ambiguous. You can try to sell the instrument with a protective order above 1.4240, which corresponds to 0.0% Fibonacci. And if the level of 1.4240 is broken, buy. 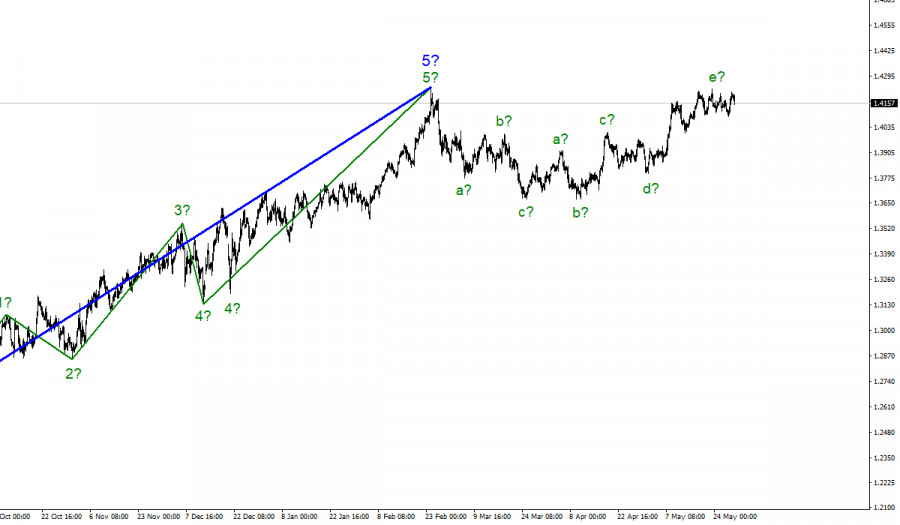 The upward part of the trend, which began its construction a couple of months ago, is taking on a rather ambiguous form. As I said above, several wave counting options are possible at once. Unfortunately, different options offer different further developments. Therefore, it may be necessary to wait for some time for the current wave counting to clear up a little.