Home Latest Forex News Overview of the GBP/USD pair. May 28. Dominic Cummings has acknowledged the... 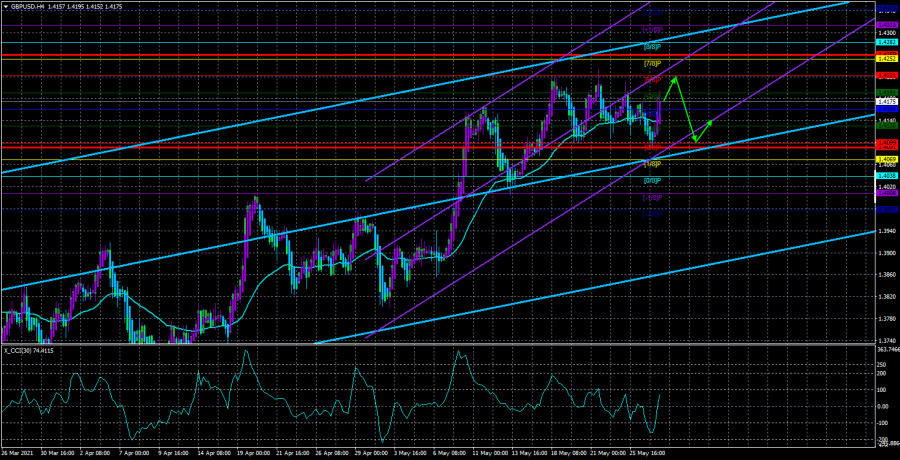 The British pound resumed its upward movement on Wednesday, May 27, and once again began its favorite “swing” mode. The last movements of the pound/dollar pair were as follows: 120 points down, 130 up, 120 down, 100 up, 110 down, 100 up. What is this if not a “swing”? And the most important thing is that such a movement cannot be called “flat.” In the article on the euro/dollar, we said that the pair has been trading very weakly recently, alternating “swing-like” movements within each day. But the situation is even worse for the pound. And at the same time, the British currency continues to be dangerously close to its 3-year highs. Thus, the upward trend persists and still does not cause any doubts. All the factors that drove the pound so high continue to be relevant, which means that the markets may well count on a further increase in the quotes of the British currency. We have repeatedly said that we believe the movement over the past year is based solely on inflating the money supply in the United States. Of course, in the case of the British pound, the “speculative factor” also plays a role because the pound has not managed to form a single normal correction over the past year. Thus, the pair is growing and will probably continue to do so for several reasons with nothing to do with macroeconomic statistics or the fundamental background. Recall that the UK economy is just beginning to recover from a severe crisis. The whole world is associated with a pandemic, and Britain is also associated with Brexit. Therefore, to say that the pound is growing against the background of the economic recovery is entirely wrong. By and large, there is still no evidence that the economy is growing in the second quarter, and in the first, it shrank by 1.5%. The US economy grew by 4.2% in the fourth quarter and by 6.4% in the first. Thus, there is no question about whose economy is recovering and who is just going to start doing it.

By the way, a new scandal is brewing in the British government. Recall that Boris Johnson regularly gets involved in various kinds of stories that do not add to his political ratings. Of course, his name is now forever associated with the successful completion of Brexit, which lasted for three years before him. However, only in the last few months, several questions have arisen to Johnson, which are submitted for consideration by special committees of the British government. Recall that at first, there was a question of how much money Johnson makes for expensive repairs in his apartment in Downing Street. Therefore, everyone remembered that Johnson spent the New Year holidays at the private villa of one of the remote islands of one of the British businessmen, who repeatedly provided financial support to the Conservative Party. The question immediately arose, what did Johnson promise in return for a luxury vacation? Therefore, the story surfaced that Johnson allegedly said to the British government that he would rather see a mountain of corpses than introduce a new “lockdown.” All these stories leave a black mark on Johnson’s political career. For example, Trump has paid a heavy price for his way of governing the country. He just wasn’t re-elected to a second term, which is rare in the States. So far, Johnson is racing at full speed on the same track.

And the other day, the former adviser to Boris Johnson, Dominic Cummings, made several loud statements about how the British government made several mistakes and missteps in countering the pandemic. It raised Britain to the first place in Europe in the number of deaths from the “coronavirus” and in the number of disease cases. Cummings said that last spring, when the epidemic was gaining momentum, the government showed its complete incompetence and unpreparedness for such an event. He said that the government was literally in a state of panic, and no one knew what to do. Cummings apologized to the public, saying that all ministers, officials, and advisers had failed to meet the standards that the public has a right to expect from the government in such a severe crisis. “The government failed,” Cummings said, apologizing to the families of the coronavirus victims. Cummings also said that the government (Boris Johnson) refused to take the threat of the virus and treat it with due seriousness for a long time. He said that he heard Boris Johnson’s phrase about “a mountain of corpses, just not to introduce a new lockdown.” Also, the former adviser Johnson said that initially, the government’s strategy was to create “collective immunity,” but this has always been denied to the public. Cummings said that the general quarantine should have been introduced immediately at the beginning of March. It is his mistake that he did not convey this idea to the Prime Minister. But the former adviser does not remove responsibility from Johnson himself, claiming that he knew perfectly well that the National Health Service would not withstand the load if it did not introduce a total quarantine. Cummings also took a swipe at Health Minister Matt Hancock, listing two dozen reasons why he should have been fired. What will now be the consequences for Johnson and his government?

Well, the pound, meanwhile, is again aiming to update its 3-year highs, completely ignoring such serious news. It again proves that the currency market is now completely uninterested in the fundamental background. Thus, we expect the upward movement to continue, especially since linear regression channels continue to be directed upwards. And local consolidation of the price below the moving average does not lead to a noticeable decrease in the pound sterling quotes. 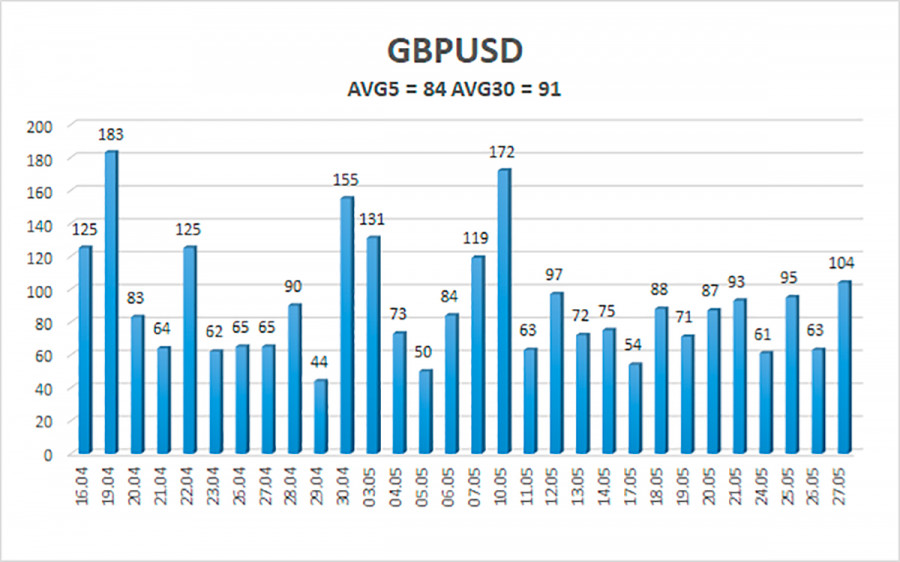 The average volatility of the GBP/USD pair is currently 84 points per day. For the pound/dollar pair, this value is “average.” On Friday, May 28, we expect movement within the channel, limited by the levels of 1.4091 and 1.4259. A reversal of the Heiken Ashi indicator back down may signal a new round of downward movement.