Home Latest Forex News Overview of the EUR/USD pair. May 27. Inflation may overwhelm the entire... 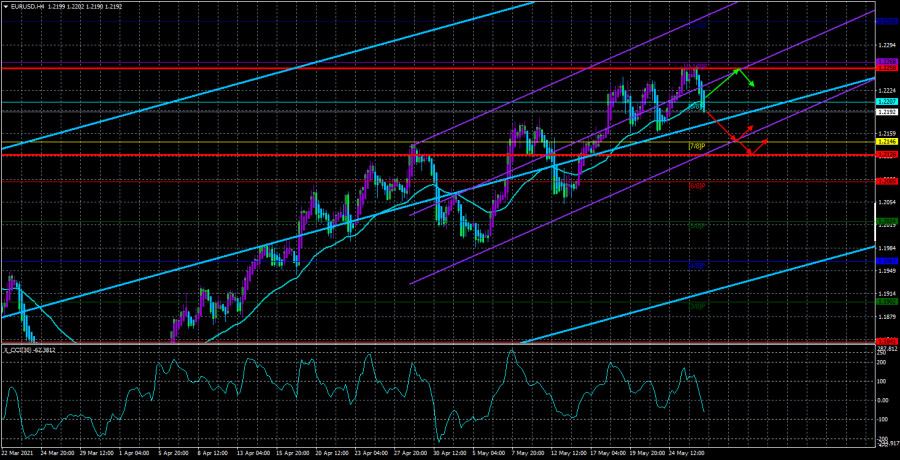 On Wednesday, the EUR/USD currency pair began another round of downward correction within the framework of the two-month upward trend. It was not possible to update the highs of the previous day, and in general, the upward movement can hardly be called strong. Recall that we previously believed that the pair has gone up about 560 points over the past two months, which is approximately equal to an increase of 13 points per day. Thus, due to the low volatility, the movements are often concise. And it’s harder to make money on short trends. It is easily understood by comparing the two by the size of the movement (by 50 points and by 100 points). Which one is easier to work out, and which one is easier to make money on, especially using the principles of intraday trading? In our case, it turns out that the pair moves only 50-point movements, with which quite often there are pullbacks. It is the pullbacks, not the corrections. A pullback is something less than a correction. Thus, figuratively speaking, we get a movement of form 50 points up, 30 down, 40 up, 40 down, and so on. It isn’t easy to trade on such often alternating segments, either on a 4-hour timeframe or on a 5-minute one. Although visually, there is a strong and confident upward trend. But we remind you that there are a huge number of trading systems and sets of trading rules. And there is not a single vehicle that would take into account all types of traffic and allow you to earn money on each of them. And there are many more types of movement than two (flat and trend). Even the flat is different. There is a flat that runs in a 200-point channel, and between its borders, you can safely trade and earn. And there is a flat in the 50-point channel with fuzzy borders with rare developments of these borders. In such a flat, trading is contraindicated for everyone. Thus, now is not the best time to trade. At the same time, global fundamentals continue to push the pair up. There is even an impression that the euro currency is growing, not even because of the traders themselves. Just every certain period, the money supply in the United States is growing, so the US currency continues to fall. And traders have a very indirect attitude to the growth of the money supply in the United States. But today, we will not talk about the growth of the money supply and talk about inflation and what to fear around the world in the coming years.

Let’s start with a banal example for first-year economics students. If there are 1,000 bananas and 1,000 bills of any money of the same denomination on the island and there is nothing else, what will be the rate of the banana? It is logical that one bill. Let us remind you that there is nothing more goods and services on the island. You can’t even hypothetically spend your bills on anything other than bananas. Now imagine that a helicopter flew over the island and dropped another 1,000 bills, but it did not drop bananas and other goods, too. As a result, there were 2000 bills on the island, and 1,000 bananas remained. What will the banana rate be now? That’s right. It will grow twice and amount to 1 banana = 2 bills. This simple example allows us to understand what will happen to the global economy and each country’s economy in the coming years. Given the amount of money printed by the world’s major central banks, it is not surprising that the world’s money supply has probably doubled. All right, one-and-a-half, that’s for sure. Thus, in the coming years, we can expect a rise in prices around the world. It just can’t be otherwise. Of course, the modern economy is much more complex than “bananas and bills.” It is clear that a specific part of the money settled in the stock market, billionaires got even richer, a particular amount of the money settled under the pillows of Americans during the pandemic. That is, roughly speaking, in a living economy, money could not become more. That is why inflation in the last year was reasonably low, although the US government has long practiced throwing money around. It should also be understood that there is a “retail economy” or a “lower-level” economy, and there is a wholesale economy or a “higher-level” economy.

Simply put, there is an economy of ordinary workers who work in factories and on farms and for whom incomes have declined during the pandemic. However, good Uncle Trump has distributed $ 1,000 to everyone. And there are millionaires and billionaires, who, in the end, got all the money that was introduced into the economy. Because all ordinary Americans spent their gifts from Washington on groceries in the store or necessities, they immediately handed them over to the richer segment of the population, which owns stores, production, and other infrastructure. As a result, there is more money in this higher economy. Hence the strong inflating of the stock market over the past year, the strongest growth of bitcoin and several other cryptocurrencies, and real estate prices. Because in those circles where bitcoin is bought, where people own companies, purchase real estate for several million dollars, there was plenty of money without all the incentive packages, and it became even more. Roughly speaking, all the money poured in by the American government settled just in the “highest economic circle.” Therefore, prices for raw materials are rising (the price of sugar, coffee, or corn has increased twice over the past year, steel futures – three times, copper -twice). However, consumer inflation, which, taking into account the cost of a big mac, bread, sausage, and cigarettes, is not particularly accelerated because the actual price growth takes place on stock and commodity exchanges and not in grocery stores.

Thus, the rise in prices is inevitable, and all over the world, all countries are tied to each other as in the modern economy. And the exchange rates will continue to change depending on how much the money supply of a particular currency has increased. Again, it is clear that if 10 trillion dollars were printed, and the euro – 5, then it will be the US dollar that will decline, which we are now seeing. Until central banks turn off their printing presses in the coming years, everything will depend on the volume of freshly printed money. 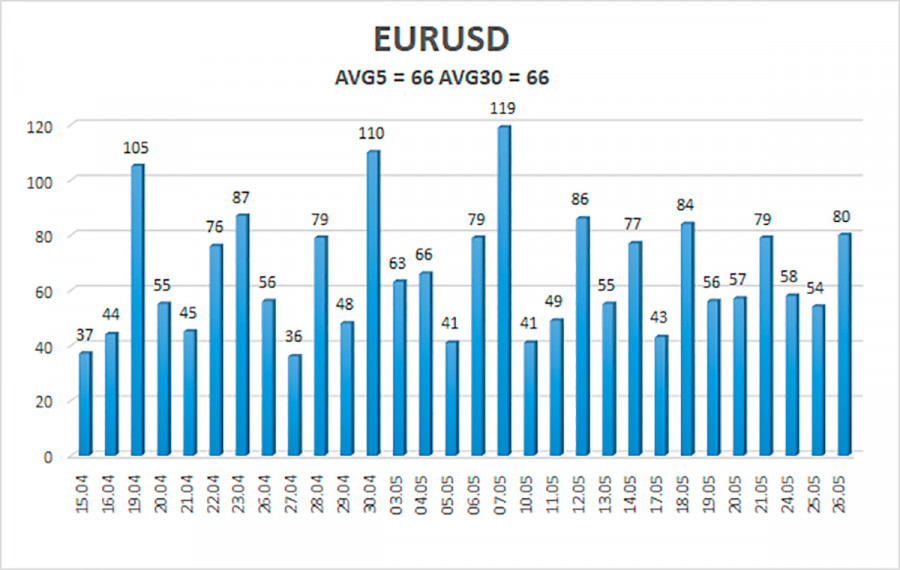 The volatility of the euro/dollar currency pair as of May 27 is 66 points and is characterized as “average.” Thus, we expect the pair to move today between the levels of 1.2126 and 1.2258. A reversal of the Heiken Ashi indicator back to the top will signal a possible resumption of the upward movement.