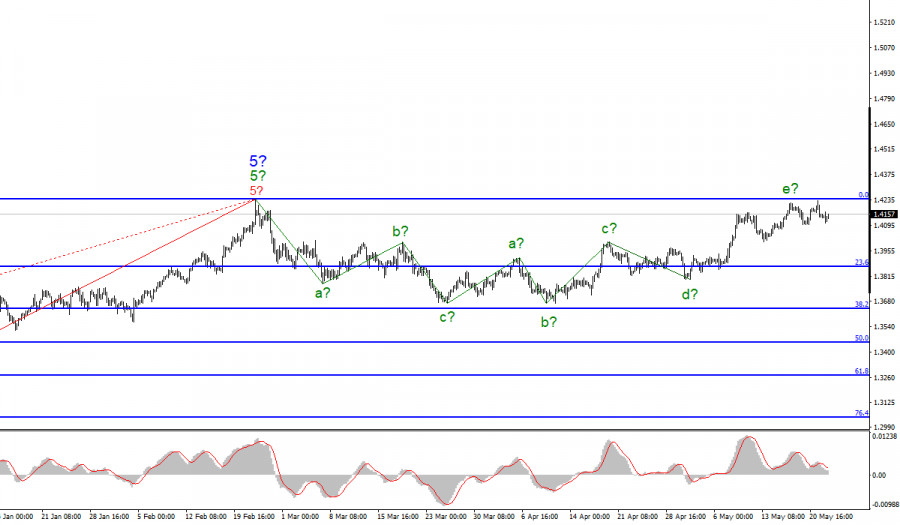 The wave pattern of the GBP/USD pair has slightly cleared, but it still raises certain questions. The latest increase in quotes led to an update of the high of the expected wave e, so now, this wave no longer looks like e at least in terms of its internal wave structure. It may still be wave e, but then it should end soon. If the current wave pattern is correct, then the instrument will start a new decline from the current positions at least within the three wave structure. In this case, the issue of updating the February highs will be postponed for several weeks, or even months. So far, it can be said that both attempts to break through the 0.0% Fibonacci level were unsuccessful since the instrument did not reach this level for several points each time. However, it can also be recalled that the current wave pattern of the upward trend section, which presumably originates on March 25, may be transformed. In particular, it is still not clear where the lower point of the current ascending set of waves is located, since the low waves of c and b are almost the same.

The GBP/USD pair also reacted to the news background on Friday, but unlike the EUR/USD, the US statistics and an unsuccessful attempt to break through the 0.0% Fibonacci level played a greater role. In the UK, economic reports were also very positive. Markets have found that the British economy is also recovering at a fairly high rate, although it is still very far from the American ones. Nonetheless, the April retail sales strongly increased, and PMIs in the services and manufacturing sectors were above the levels of the previous month. In the US, the statistics were positive, which supported the dollar during the afternoon. Business activity indices were also better than market expectations and above April values. However, even the loss of 90 basis points by the instrument on Friday does not allow us to make adjustments to the wave pattern now. This week, the Bank of England’s parliamentary hearings on monetary policy and a speech by the Governor of the Bank of England, Andrew Bailey, were scheduled. However, there is no information yet from this event. The GBP/USD tried to continue Friday’s decline during the day, but it retreated from the daily lows each time and is now trading near the opening levels of the day, thus maintaining high chances to further construct an upward pattern.

The wave pattern continues to be very confusing, so it is suggested to wait for it to clear up. There are at least several options for a wave pattern, each of which can be implemented in the coming weeks. At this time, the upward wave e is supposed to be done with its formation. However, its internal wave structure looks ambiguous even now. It is possible to sell the instrument with a protective order above the level of 1.4240, which corresponds to 0.0% Fibonacci. 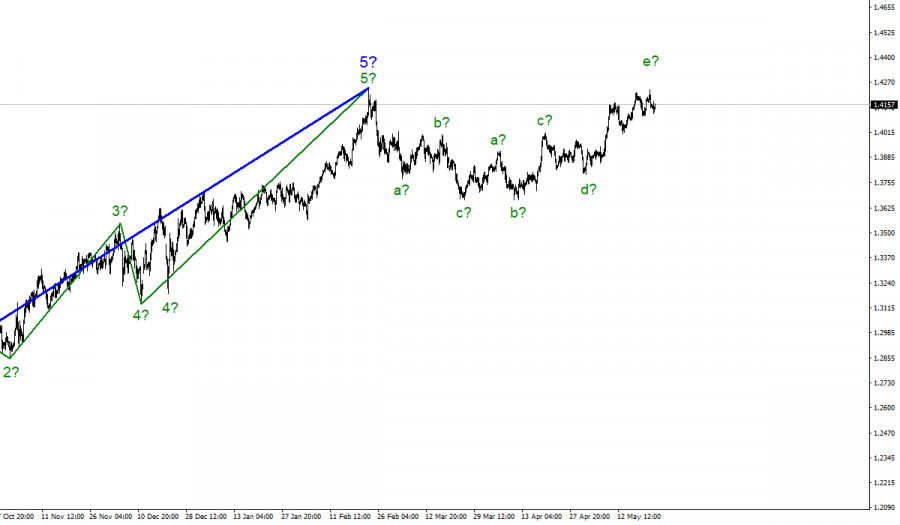 The upward section of the trend, which started to form several months ago, is taking on a quite unclear form. It was mentioned above that several wave pattern options are possible at once. Unfortunately, different options offer different further developments. Therefore, it may be necessary to wait for some time for the current wave pattern to slightly clear up.

Overview of the EUR/USD pair. June 18. The Fed has made it clear that it will begin to tighten monetary policy, but the timing