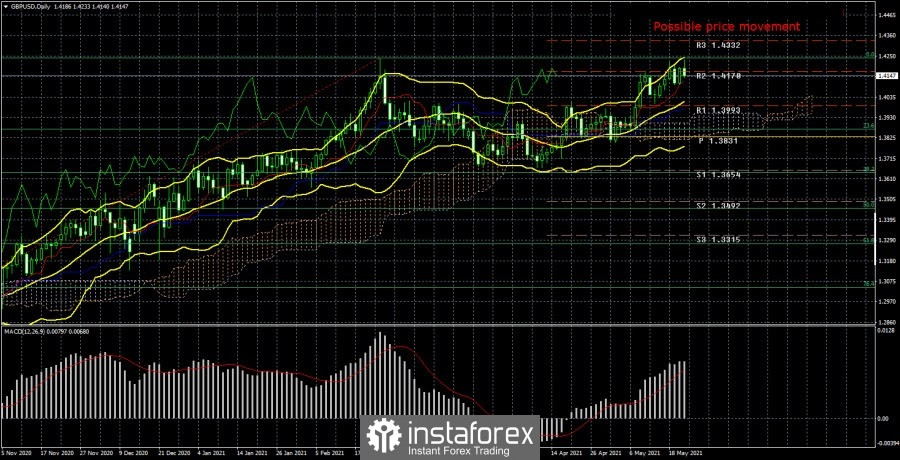 What to say about the pound ahead of the new trading week? For the pound/dollar pair, a fairly strong and confident upward movement continues. The price last week stopped just 7 points from its 3-year high and is likely to break it next week. All the factors that brought the pound/dollar pair so high and allow it to continue trading at these levels remain in force. Thus, we still expect the upward movement to continue. At least, at the moment, there is no reason to assume even a significant correction in the pound. Moreover, the pair could not correct a couple of months ago against the global upward trend of 2,800 points. The bears are now very weak, so we do not expect a strong downward movement. Perhaps it could be expected if the fundamental background somehow changed and the markets generally paid attention to it. But now all the fundamental and macroeconomic data have only a local impact on the market. Nothing changes globally. Of course, if Scotland holds an independence referendum tomorrow, in which 80% of Scots vote “yes” to leave, this could put a lot of pressure on the pound’s position. But we remind you that even now the “foundation” is not in favor of the British currency. Both economically and geopolitically. But, unfortunately for the dollar, the US government and the Fed continue to pour huge amounts of freshly printed money into the economy, so it is unlikely that a strong dollar growth should be expected until this process ends. And it is unlikely to end in 2021. Plus, do not forget that the pound has also changed to an upward trend in global terms. The last one took 13 years. Thus, although the British economy is recovering much more slowly than the American one, the pound is still growing.

The next week will be stunningly boring for the British pound. In addition to the macroeconomic statistics in the States, where there will be a couple of reports that deserve attention, nothing more interesting is planned. The UK calendar is empty. There will also be a couple of absolutely minor reports and a couple of speeches by representatives of the Bank of England, just like in the Eurozone. Nothing else. However, the British currency still does not need all these “statistics” and “foundation”. Thus, the American markets can pay attention to these data and even work them out. But it is unlikely that this will somehow affect the overall upward trend. Thus, we expect further growth of the pair regardless of the fundamental background of the next week.

It should also be noted that the Bank of England is now the most militant among the central banks of the European Union and the United States. It was the head of the Bank of England who said that he would not allow inflation to exceed 2.5%, which the markets immediately interpreted as a hint of a possible rate hike, although a few months ago there was talk of reducing this rate to a negative area. From our point of view, such rhetoric from Bailey is not quite true. Simply put, the British regulator recently considered additional stimulus, and when official statistics do not yet give any reason to conclude a strong recovery, the Bank of England hints at a possible tightening of monetary policy. And, for inflation to go above 2.5% in the UK, you need to try very hard. Recall that the latest report of the consumer price index showed inflation of 1.5%. What does this have to do with the low base factor (the weak inflation rate in April last year), and the energy price growth factor (as noted by Andrew Bailey himself). If the inflation in the United States rose to 4.2% and caused concern among investors, then in the UK there is absolutely nothing to fear. And in any case, what impact does the hawkish tone in Andrew Bailey’s rhetoric have on the pound? Beneficial? So the pound shows just a record growth over the past 14 months without it. Thus, the “hawkish” rhetoric of representatives of the Bank of England (although recently Silvana Tenreyro hinted at a possible weakening of monetary policy) may provide additional support for the pound. However, it is growing well without it, and other factors are more important for the British currency. 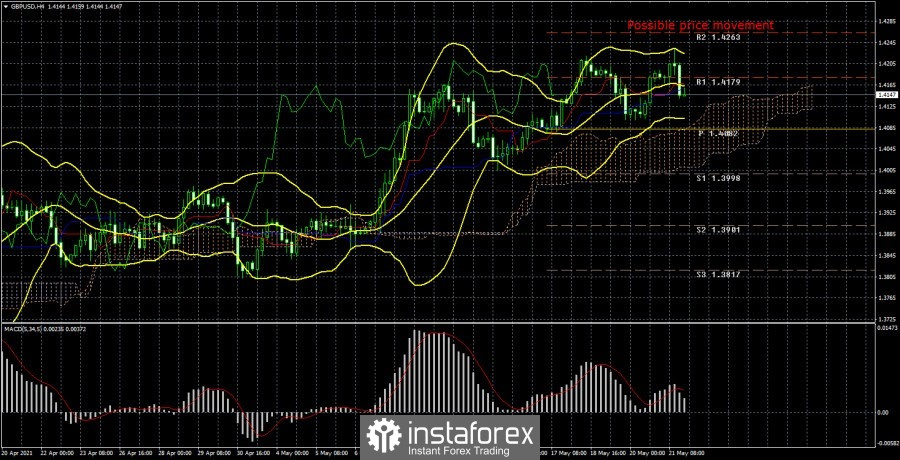 Recommendations for the GBP/USD pair:

The pound/dollar pair on the 4-hour timeframe at the end of last week, when approaching its 3-year high, frankly slowed down and began to correct. The price managed to gain a foothold below the critical line, so in principle, the correction may continue on Monday and Tuesday. But we remind you that now the factors that support the pound are much more and they are very strong. Thus, with a probability of 80%, the growth of the British currency will continue with the targets of the resistance levels of 1.4263 and 1.4360.