Home Latest Forex News Trading plan for the GBP/USD pair for the week of May 24–28.... 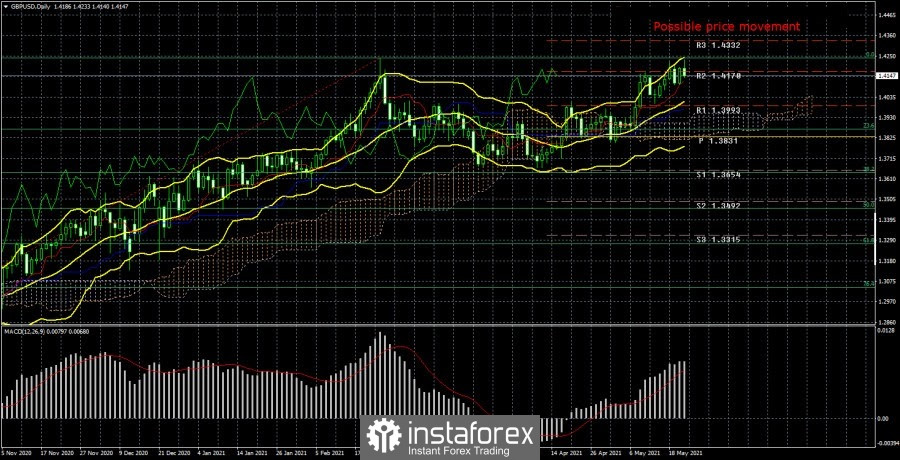 The GBP/USD currency pair continued its upward movement for most of the past week. As we have said more than once, if you look at what processes are currently taking place in the UK, what consequences they may have, and what is the state of the economy, then, probably, everyone would say that the pound sterling should be around the level of $ 1.30, or even lower. But other factors are working now. Thus, the geopolitical and economic problems of Britain do not worry traders too much and do not affect the exchange rate of the British currency too much. Recall that, as in the case of the euro currency, a new global upward trend is expected to begin in 2020. Before that, the pound was in a downward movement for 13 years and lost about 97 cents or 9,700 points during this time. It is clear that, from a fundamental point of view, the pound should continue to fall in price, but in global terms, both a strong upward correction and a new upward trend are possible. It is the first item that is actively working on the pound – technical. Further, the “speculative factor”. The minimal correction of the pound in February-March of this year allows us to speak about this factor. If the euro was adjusted for 3 months in 2020 and only then resumed its upward movement, then the pound cannot boast of this: it was adjusted purely symbolically. Thus, we assume that traders keep longs open and do not cut them no matter what. Third, the factor of flooding the American economy with trillions of dollars. The money supply in the US is growing. The money supply is growing in the UK (the Bank of England is also not a saint). However, it is happening much faster in the States. As a result, all global factors remain on the side of the British currency. 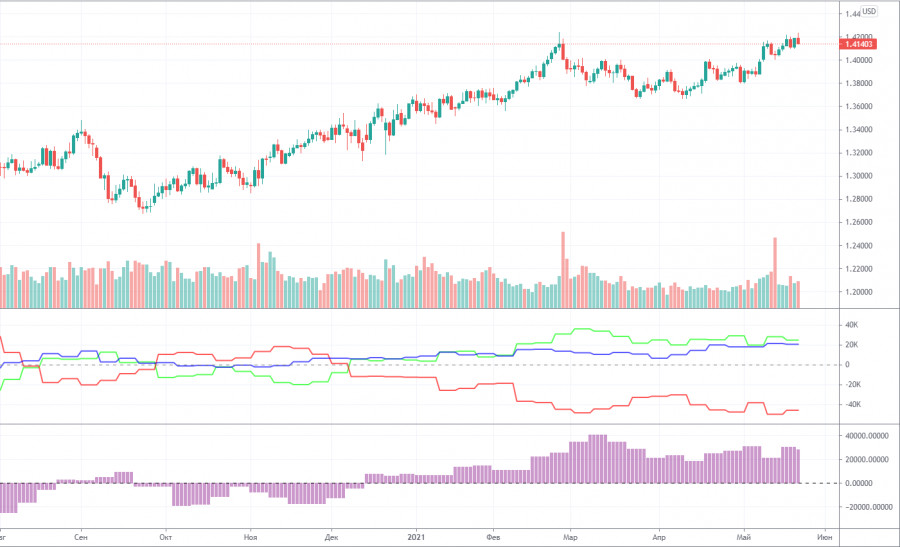 During the last reporting week (May 11–17), the GBP/USD pair fell by 10 points. In general, the pound continues to rise in price, which can be seen in the illustration above. Major players have resumed building up long positions since around December last year. But at the same time, even according to the COT reports, there are third-party global factors that also support the pound. Until December last year, when the upward trend in the pound continued, commercial and non-commercial traders did not understand what to do with the pound. Then, it was completely unclear how Brexit would end. The red and green lines of the first indicator constantly crossed, which indicates the absence of a trend. But the pound still rose. Therefore, even from this point of view, there is a serious imbalance in the money supply of Britain and the United States. Otherwise, it turns out that neither the big players nor the small ones bought the pound, but it still grew. It doesn’t happen that way. If market participants did not buy the pound, it could only grow due to non-market factors, in particular the intervention of the Fed and the Bank of England. Now, COT reports show that professional traders have started buying the pound again. However, they are not doing it very zealously. Rather, they just try to follow the trend, which is formed without their special participation. For example, in the reporting week, a group of “Non-commercial” traders closed 3,800 buy contracts and 1,500 sell contracts. Thus, the net position for this group has decreased, which means that the “bullish” mood has weakened. It is the “weakening of the bullish” and not the “strengthening of the bearish”. The bears now continue to rest.

During the current week, several important reports were published in the UK. However, the markets again did not react to them in any way. For example, the unemployment rate in the UK continues to decline and has already reached the level of 4.8%. The consumer price index is accelerating and rose to 1.5% in April. Retail trade in April increased by 9.2% m/m. Business activity indices in the service and manufacturing sectors also rose in May. However, these reports cause only a local reaction, without affecting the overall trend in any way. Therefore, we are forced to state the following: the economic condition of the UK is improving but this does not matter, since America is far ahead in recovering from the crisis, and the pound is still growing. Also, for the second week in a row, the head of the Bank of England, Andrew Bailey, speaks almost every day in the UK. But it doesn’t provide much really important information. In his latest statement, he made it clear that he does not expect inflation to exceed 2.5%, and the Bank of England is ready to start scaling back its quantitative easing program if necessary.

1) The pound/dollar pair continues to be in an upward trend, which it resumed about a month and a half ago. Thus, buy orders remain relevant, and the nearest targets are the previous local high of 1.4240 and the resistance level of 1.4332. Given that global factors are now supporting the pound, it is unlikely that the pair will fall in the near future. In any case, until the price is fixed below the critical line, there is no point in talking about a downward movement.

Support and resistance areas – areas from which the price has repeatedly bounced before.

Indicator 1 on the COT charts – the net position size of each category of traders.

Indicator 2 on the COT charts – the net position size for the “Non-commercial” group.