Home Latest Forex News Wave analysis for XAU/USD on May 11, 2021 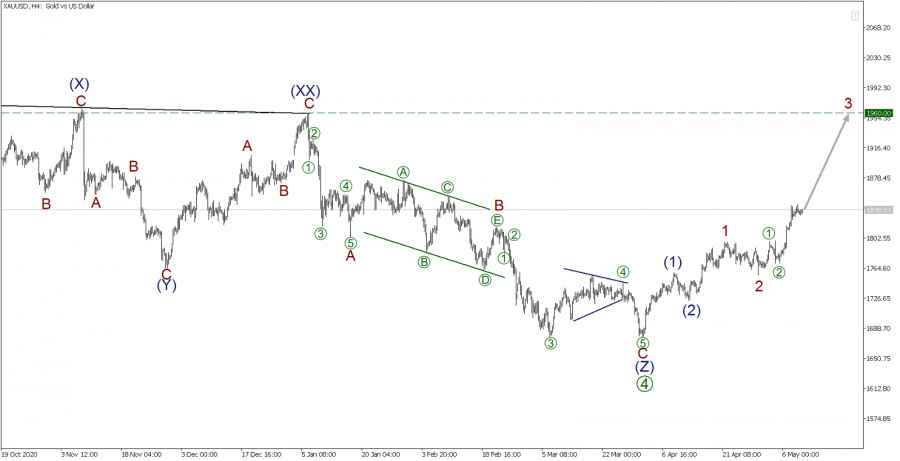 We can assume that wave [4] is fully done with its pattern, as the market reversed and began to move in an upward direction. If this is the case, then the initial part of the ascending fifth wave is now developing, which is most likely to take the form of a simple impulse (1)-(2)-(3)-(4)-(5). It should be noted that only the first two sub-waves (1) and (2) were formed in the last month.

Now, let’s consider the structure of the last section of the chart on the hourly time frame.

The market began to form an upward impulse (3), following the completion of the downward corrective wave (2), which took the double zigzag W-X-Y form. Its initial part, which has been formed to date, is marked in red with sub-waves 1 and 2. Wave 1 is a bullish simple impulse, while wave 2 is a complex correction, which is a triple zigzag [W]-[X]-[Y]-[X]-[Z].

In the near future, the price is expected to increase and a larger and stronger impulse wave 3 will develop. Its approximate future structure is schematically displayed on the chart and marked with green sub-waves [1]-[2]-[3]-[4]-[5].

The completion of this construction is expected to reach the level of 1960.00. This is the high at which the wave bundle (XX) of the bearish correction [4] was completed earlier. This can be looked up in the H4 time frame.

Currently, opening buy deals can be considered in order to take profit at a specified level.